Online censorship consists of the control or the removal of certain contents that are accessible to the public. It exists because some governments and platforms want to regulate content. In particular, the latter’s policies are becoming more numerous and specific as the production of visual content grows exponentially. For example, Instagram counts 3600 new posts every second (edinet). The more the phenomenon involves users, the more it obtains relevance, becoming one of the most discussed topics: why are some contents censored? Who censors them? Which is the boundary between appropriate and inappropriate content? The research has been structured following three levels of depth to make this ambiguous and controversial phenomenon clearer. The first level explores the types of censored content and the different visual languages used to censor them. The second analyzes the reactions that censorship produces, both in terms of anti-censorship movements and of methods that users use to avoid it. Finally, the third investigates the most invisible aspect of the phenomenon: who is working behind it? The research shows how censorship is applied to images differently based on the typology of the platform and the content. This phenomenon can act silently, leaving the users unconscious, or other times it can be extremely evident, pushing them to search for ways to respond to or bypass it. 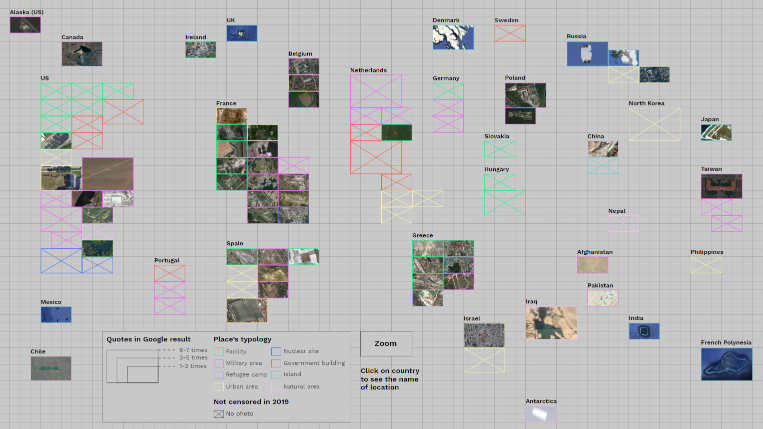 What is Google’s ranking of censored places on Google Maps and what kind of places are they?

Satellite technology allows to get images of every single angle of the world, and Google Maps lets users see them. However, on this platform, some locations appear digitally obscured intentionally, most of the time for reasons of national security, other times for unclear reasons. This is the reason why a map of the most mentioned places around the world censored on Google Maps was created. 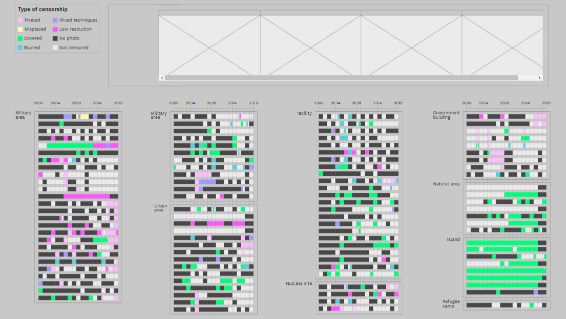 How did the censorship of the researched places online change over time and which are the techniques used to censor them on Google Earth Pro?

While available satellite images allow exploring all the places on Earth, they also show which of them have been censored. Google Earth Pro, unlike Google Maps, enables users to see places timelines, and how censorship is applied, despite there are no images of each year. The analysis wants to give back a historical view of how this phenomenon and its visual languages have changed over time. 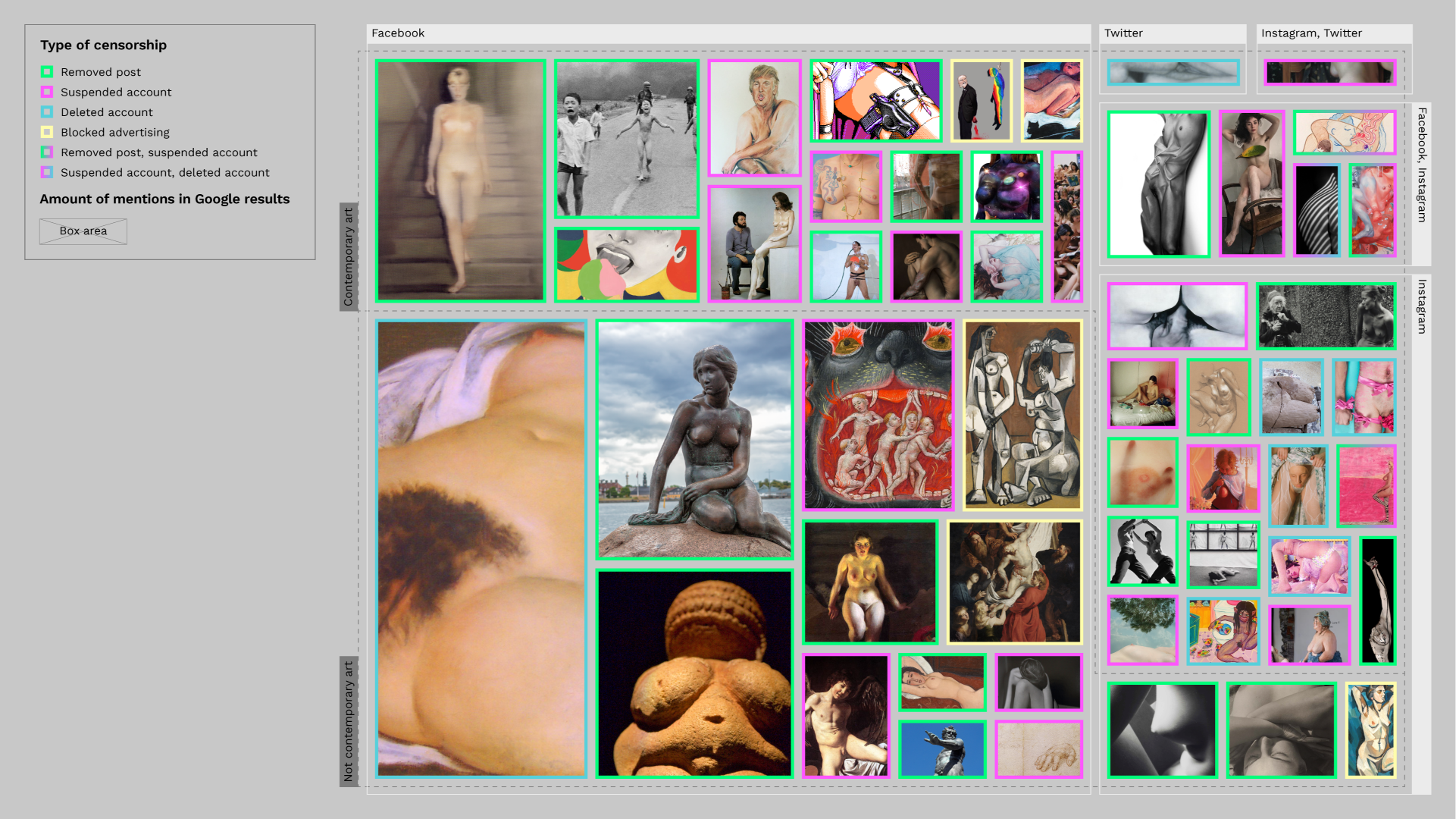 Which are the censored artists and artworks on social media that are more mentioned on Google Search?

The border between artworks and explicit contents is sometimes blurred because censorship on social platforms is also applied to art; for example, the painting "The Origin of the World" was censored on Facebook for nudity. The research aims to represent the most mentioned censored artists and artworks, whose popularity depends on their censorship on social media and not on their value. 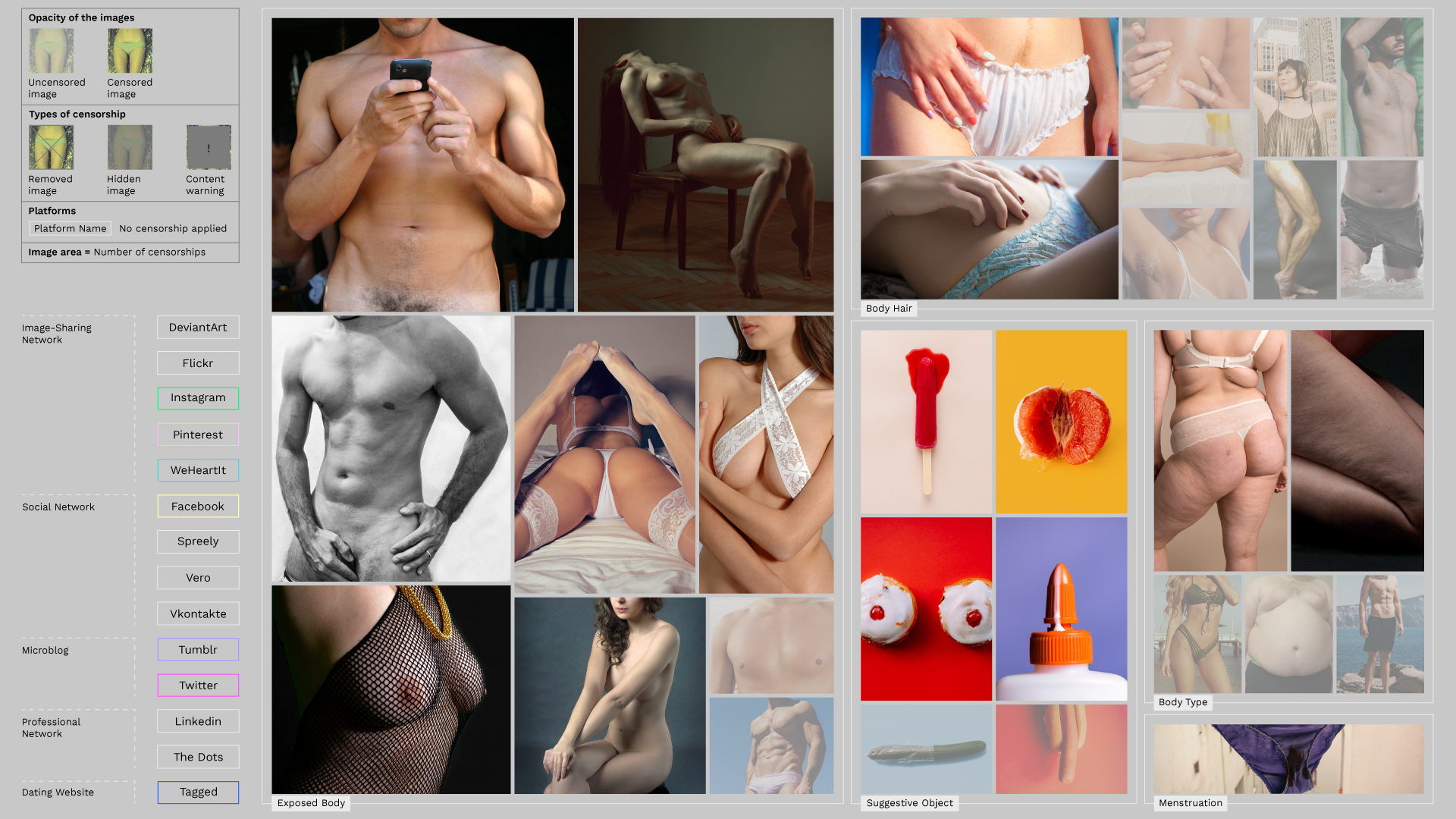 Women are often at the centre of controversies regarding online censorship. Removed photos or deleted accounts are frequent, even if the community guidelines are respected. The cause is that some aspects of the female body, such as menstruation, are still not accepted. This stress test has the aim to examine if online censorship on different platforms hits women's and men's similar photos equally. 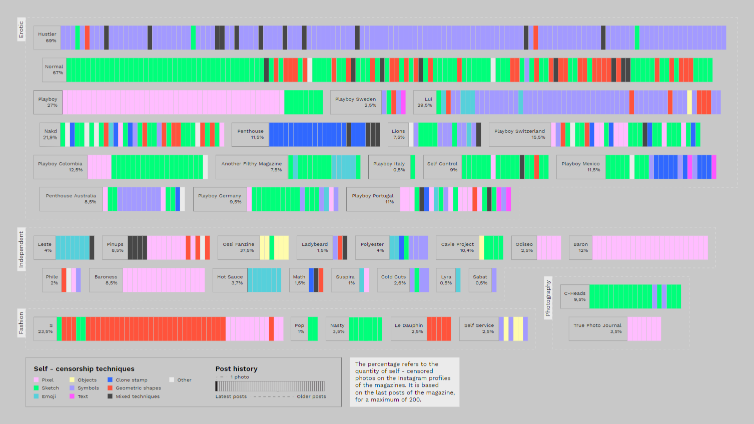 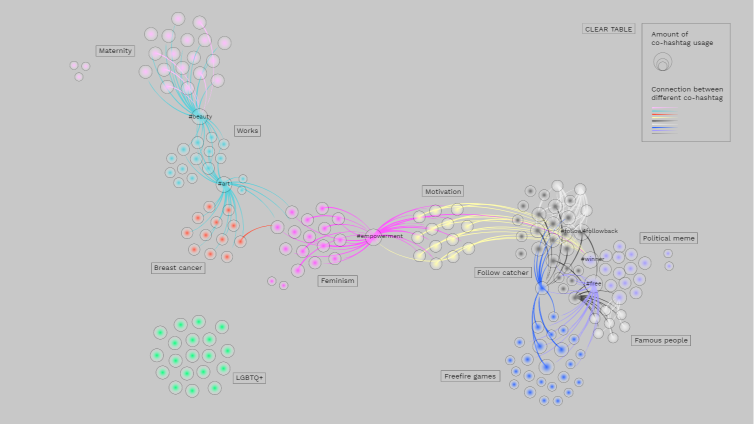 Which are the sub-topics related to freethenipplemovement on Instagram?

"Free the Nipple" is a campaign created in 2012 in New York as a protest against the censorship of female nipples. Over the years, the movement spread on Instagram by the use of the hashtag freethenipplemovement. It is interesting to map, through the study of the co-occurrences of hashtags on Instagram, which are the topics most associated by the users to the movement and their relationships. 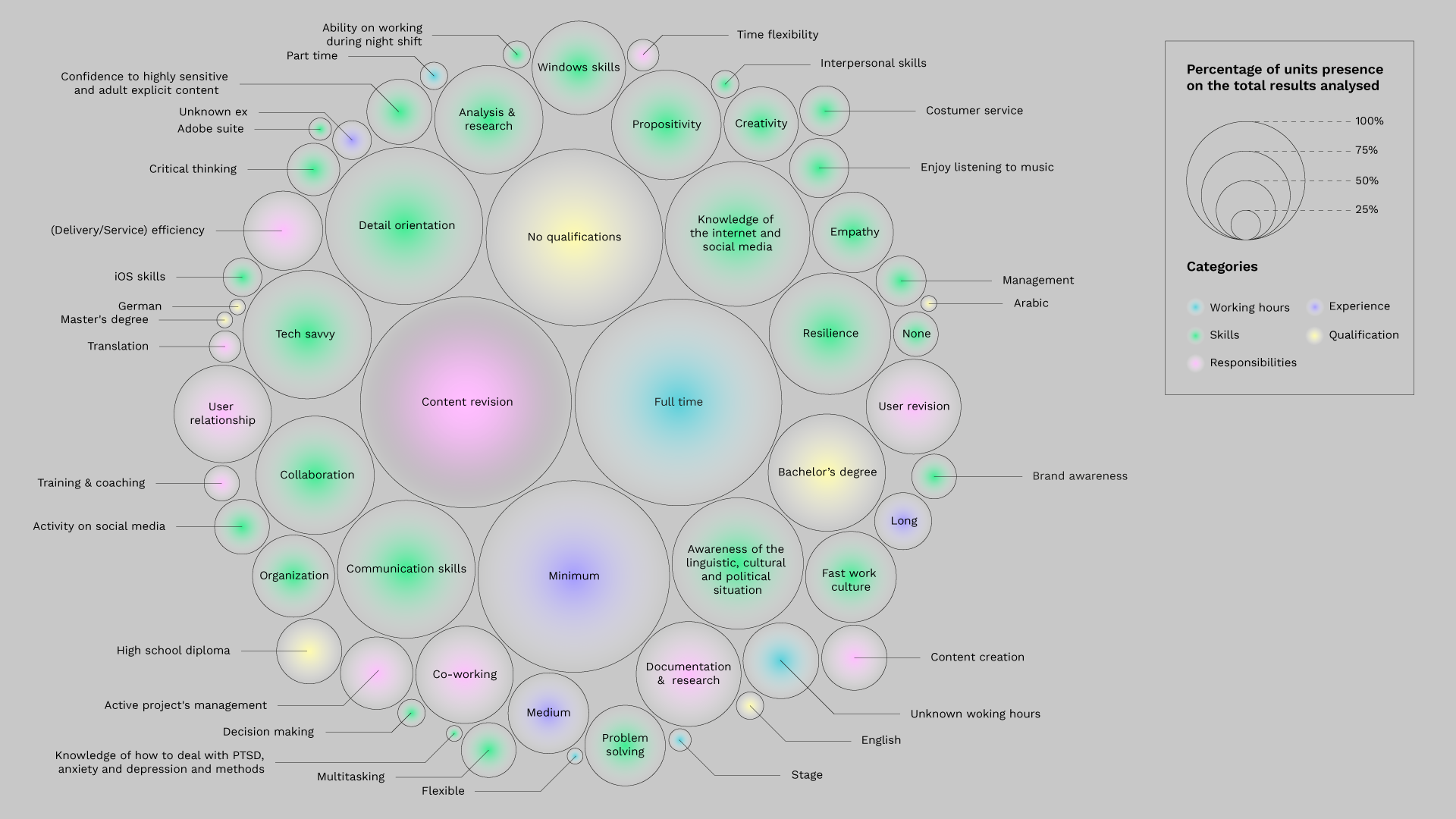 Which are the features mentioned in the content moderator’s job offers, how should candidates be and what are they expected to do?

Censorship requires people who censor and spend many hours watching all visual contents, including violence, that others won't see online. They are called content moderators, and their work is to decide if visual contents are appropriate for the policy of digital platforms. The research is aimed at defining the common profile of a human moderator through the worldwide job offers on LinkedIn. 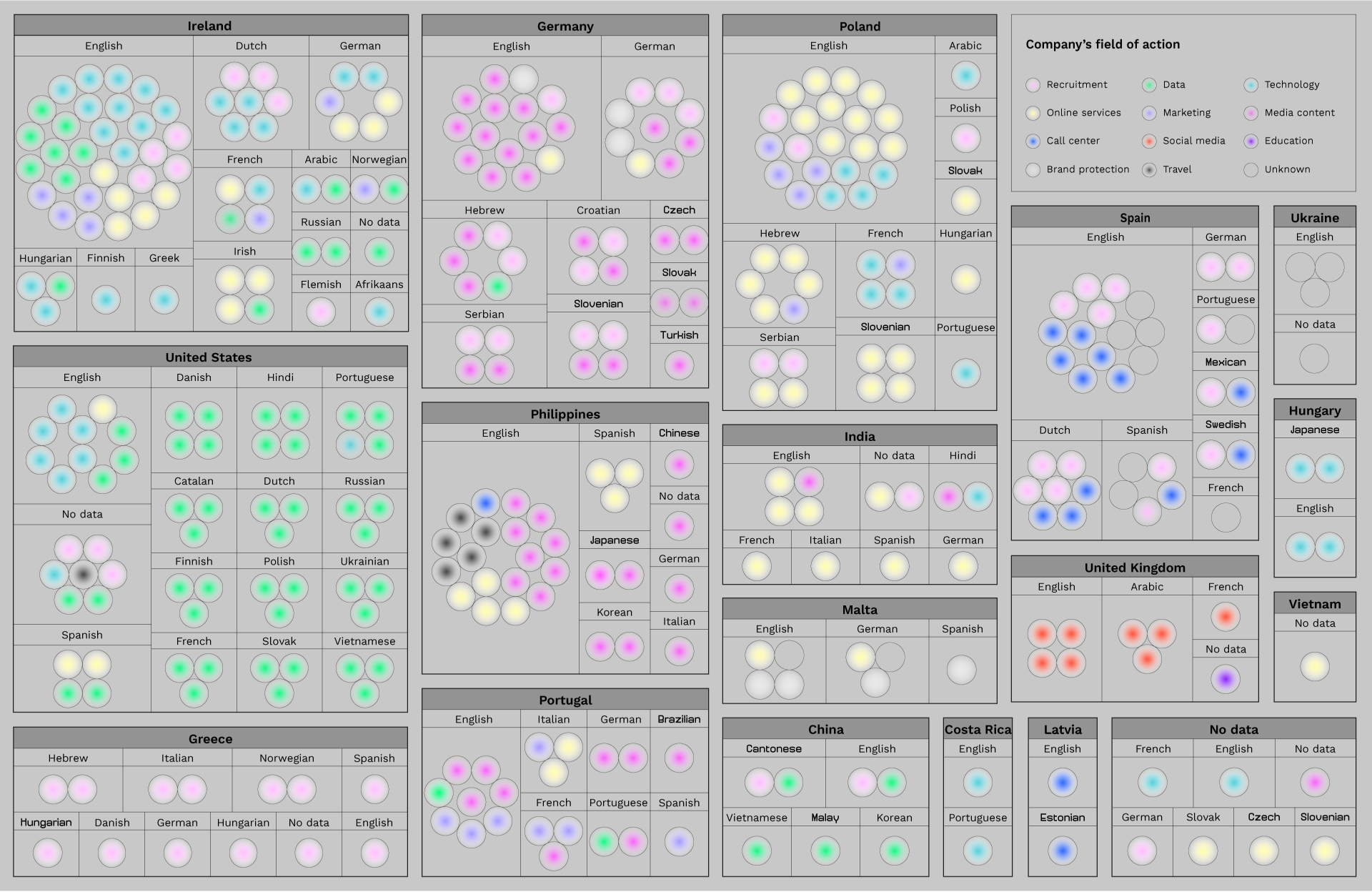 How is the distribution of the content moderator’s job offers around the world, and which are the required languages per country?

The most common requirements of companies that are looking for human moderators are spoken languages. These companies are usually situated in countries far away from the ones whose online contents are supposed to be moderated. This research has the purpose to know the starting and the arrival places of online censorship, pointing out the country demand for human content moderators on LinkedIn.